What to do on a sunny Sunday morning in October when we don't have anything on our schedule? A motorcycle ride to Cottonwood for lunch!

We ride the winding, twisting hairpin turns on 89A into Jerome several times each year because the narrow 2-lane road through the Black Hills mountain range in the Prescott National Forest is a gorgeous route made for motorcycles. Tall pine trees cover the hills, stone walls tower over the side of the highway, and off in the distance we can see the high cliffs of the Mogollon Plateau. 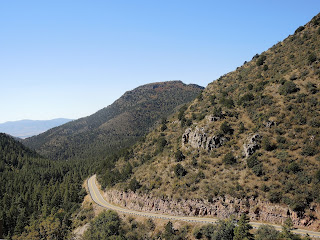 89A winds into Jerome, an old copper mining town precariously perched on the side of a mountain. On the way into Jerome we followed two slow-moving cars so we had to content ourselves with poking along while we watched the scenery. On the way home, however, Mike took advantage of the clear road in front of us to zoom through the hairpin turns. 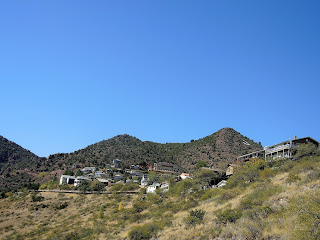 Cottonwood lies in the Verde Valley along the Verde River, one of the largest perennial streams (meaning that it has water all year; many streams and rivers in Arizona and the Southwest are dry except during the rainy season) in Arizona. Our favorite lunch spot is Bocce where we like to sit outside while we enjoy the Sunday lunch special of 1/2 pizza and house salad. Today we watched numerous Corvettes of various vintages drive up and down the main street, part of the local Verde Valley Vettes poker run.

Because it was such a beautiful day, we took the long way home on the old Black Canyon Highway. Originally built in the 1870's, it was the main stagecoach route from Phoenix to Prescott. Today part of it is incorporated into I-17, and there is about an 8-mile section that runs from the Prescott Country Club subdivision in Dewey-Humboldt to the La Quinta Inn in Prescott. Parts of the road are still dirt, but probably not as bumpy as during the stagecoach days. The BMW is built for off-road riding and it's always fun to get off the pavement and ride on dirt. 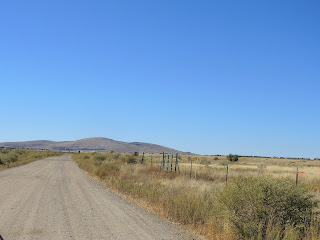 Arizona-blue skies, mountains off in the distance, hairpin turns, dirt 'highway' - today's ride reminded us of why we love living in Arizona.
Posted by Lynn Grieger and Mike Ryan at 8:55 PM