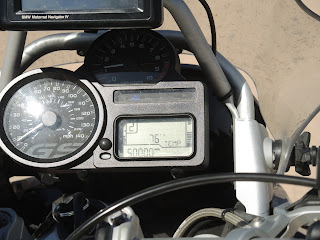 We started from home with the odometer at 49,972 and decided to mark the occasion of hitting 50,000 miles by riding out on Williamson Valley Road. The north/south road is paved and busy with local traffic near Prescott, but as we rode north the houses thinned out with views of Granite Mountain to the west. This used to be ranch country, and today many of the ranches have been developed into subdivisions with names like Inscription Canyon, American Ranch, and Talking Stick. My favorite, however, is Hootenanny Holler, which sounds like it belongs in the mountains of Appalachia instead of the Arizona high desert.

The subdivisions end and Williamson Valley Road turns to dirt, continuing to wind north 45 miles toward Seligman. Williamson Valley is named after Lt. Robert Stockton Williamson who was a government surveyor in this area in the 1850's. This is truly ranch country, with no houses or structures except for long lines of fences and a lone windmill as far as we could see in every direction. 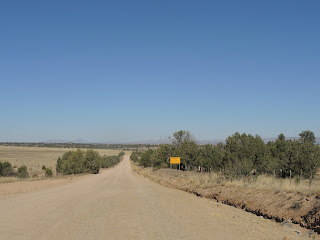 About 4 miles down the surprisingly well-maintained dirt road we stopped to celebrate our 50,000th mile. We purchased the BMW in July 2012 in Albany, New York when we were living in Vermont. We rode to Kentucky in 2013 and 1 month later across the country to Arizona when we moved here. In the past 4 years we've ridden through every western state, many of them more than once. We rode through a hailstorm in southern Arizona, across snowy mountain passes in Colorado, along the Pacific Coast Highway, across the Mississippi River, through more midwestern cornfields than we'd like to remember, during hard rain downpours, on days so hot I felt like I was melting inside my motorcycle gear and on other days so cold I couldn't feel my hands even inside my heated gloves.

Mike's thinking about a new motorcycle in the near future, and until then we'll continue to put more miles on the R1200GS, looking for the next curving road with no cars in front of us and the beautiful countryside all around.

Posted by Lynn Grieger and Mike Ryan at 8:29 PM