It was a sunny Saturday with Arizona-blue skies so we decided to go on a 4-hour round-trip ride through the cooler pine forests to Payson and back. Even though this is the start of the Memorial Day holiday weekend, we only encountered traffic in two places:  on the 7-mile stretch of I-17 and riding through the small town of Strawberry, where both sides of the 2-lane highway were crowded with parked cars and people walking through the local arts and crafts fair.

This is a familiar ride for us, since whenever our long trips head north or east we typically ride part of this route:  I-17 north to the General Crook exit onto AZ-260. George Crook was a career US Army officer, promoted to Major General during the Civil War. He was sent to the West during the Indian Wars, and fought against the Apache in Arizona. Geronimo surrendered to General Crook in 1886, marking the end of the Indian Wars in the Southwest. After leaving the Army, Crook worked for the US government promoting better treatment of the Native Americans.

Heading north on I-17 we see the Mogollon Rim, an escarpment that rises to 7,000' elevation and in many places is 2000' above the valley below. The Rim forms the southern end of the Colorado Plateau that slices 200 miles across northern Arizona. Our trip today takes us through "Rim Country", the area in Arizona right along the Rim in the densely forested White Mountains. 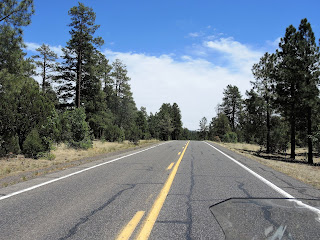 Because of the higher elevation, it's 15-20 degrees cooler on the Rim than in Prescott, which is one reason why this is such a popular area in the summer. Due to the extremely high risk of fire this month, the Forest Service closed most of the Coconino National Forest to all types of public access, and we saw bright yellow and red warning signs across all of the forest roads along our trip.

We turned south on AZ-87, riding through the small towns of Strawberry and Pine until we reached Payson. After a quick stop for ice cream and a bottle of water, we retraced our route back home to Prescott.

I zipped up my motorcycle jacket all the way to the chin as we rode along the windy Mogollon Rim, and then unzipped it as we dropped down off the Rim into Camp Verde, where at 3,100' elevation the temperature soars into the high 80's and the landscape changes from pine forests to scruffy high desert vegetation. 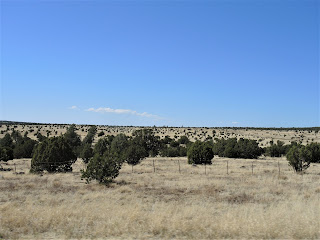 We saw several groups of motorcycles along our trip today, but the majority of the time we had the 2-lane AZ-260 and AZ-87 to ourselves - just the way we like it.


Posted by Lynn Grieger and Mike Ryan at 10:23 AM No comments: