Only people who love riding motorcycles will ride 250 miles round trip for lunch. We haven't ridden with our friends Steve and Kim for several years, and finally everything fell into place for a ride today to Payson, AZ. In the summer we ride north into the cooler mountains, and we were rewarded with a low temperature of 83 degrees today as we rode up in elevation to about 7100' on the Mogollon Rim, an escarpment that forms the southern edge of the Colorado Plateau. It's an area covered in pine trees and high, craggy rock outcroppings.

We've ridden this route so many times we've lost count:  east out of Prescott on AZ 169 for a quick 6 miles north on I-17, then east again on AZ 260 through Camp Verde, site of pueblos built into the sides of canyons by Sinagua around 1000 AD. The Spanish came through this area in the late 1500's, and it was the site of a military fort in 1871. Camp Verde is at about 3500' elevation, and it's always the hottest spot on our rides; today it was 106 degrees on our way home.

Thankfully after we pass through Camp Verde AZ 260 starts to wind its way up the Mogollon Rim, giving us long views over the valleys. Steve and Kim rode in front of us, zooming through the sweeping corners as the weather became cooler. 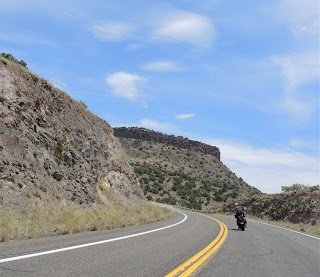 We headed south on AZ 87 through the Rim towns of Strawberry and Pine, doing our best to pass as many of the slow-moving RVs as possible. We crossed the East Verde River, a tributary of the Verde River, about 5 miles from Payson. The East Verde has flowing water and we saw several people jumping into the river to stay cool.

As we came through a roundabout toward the Payson Airport and our lunch destination, a lab-size dog ran out from a gas station on our right and tried to zip across the road in front of us. Mike braked hard to miss the dog as our heart rates zoomed up. The dog kept running down the street as we pulled over to catch our breaths. A man from the gas station walked over and said the dog was a stray and he was afraid something like this would happen, then praised Mike for his superb bike handling skills to keep us upright.

We continued a couple of miles up the road to the Crosswinds Grille at the airport where we watched some small planes land and take off, and saw a large red helicopter, a Sikorsky S64, that's used to fight forest fires. On our way to Payson there were several signs warning about heavy smoke from a forest fire in the area, but the air was clear today. Fire danger is at a high level in this part of Arizona due to hot temperatures and windy, dry conditions.

After lunch we retraced our route back home, vowing to get together more frequently for motorcycle trips in the Southwest.

The folks at Viking Cycle sent us a Viking Cycle Ironside Textile men's motorcycle cycle jacket for Mike to review. He's always looking for any excuse to ride the BMW, so he happily put on the jacket and took a ride to run errands and enjoy some time zooming around our area. 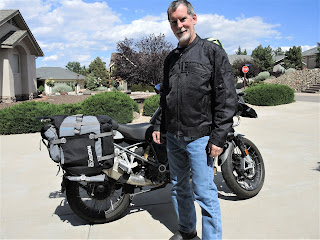 He's always worn a high visibility, bright yellow jacket riding the motorcycle to do everything he can for motorists to see him, and he wasn't sure about the black jacket. However, when he came back from the ride he was ecstatic about the fit and function of the Viking jacket. It's early June here in Arizona with bright sunny skies and temperatures in the mid to high 80's, and  he was surprised that the high-grade mesh ventilation system in the Viking jacket kept him pleasantly cool. 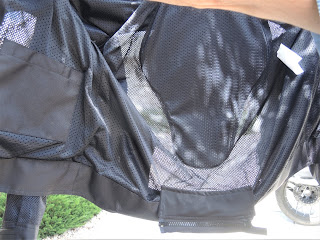 He also loved all the pockets and appreciates the protective armor on the elbows, shoulder and spine. The PU coated Cordura jacket looks like it will be really durable. There are plenty of ways to adjust the fit, although he felt the jacket runs a bit small and recommends ordering up one size.


Watch our video of Mike showing off the jacket's features

A big thanks to Viking Cycle for this very affordable, highly functional, and great-looking jacket!
Posted by Lynn Grieger and Mike Ryan at 4:38 PM No comments: