We spent 5 days riding a BMW in Ireland last month, and while we thoroughly enjoy riding and exploring new places, this weekend we decided to ride a familiar loop near home. The summer monsoons have ended, and while a few puffy white clouds gathered over the Mogollon Rim, we had clear weather for the afternoon. The end of summer monsoons also means cooler temperatures, so instead of wearing my vented light-gray motorcycle pants and a cooling neck wrap, I opted for standard black motorcycle pants and both warm layers to my motorcycle jacket.

We rode a favorite loop:  north on I-17 for a few short miles to the General Crook Trail exit, where we hooked up with Arizona 260 heading west. General George Crook fought for the Union Army during the Civil War, and after that war, like so many career soldiers, was stationed in the southwest. In 1871 he established a supply route that connected forts Verde (Camp Verde today, where we exited the interstate), Apache, and Whipple (now home to the VA Hospital in our town of Prescott).

When we exit I-17 and turn onto 260 West we're treated to views of the Mogollon Rim, an escarpment of limestone and sandstone that rises 4,000 feet over the landscape to the south. Route 260 winds and climbs onto the Rim, with the temperature dropping 20 degrees as we gained elevation. We sometimes see bighorn sheep on the hills alongside the road, but today our primary company were several groups of motorcycles heading to an event in nearby Cottonwood.

We turned northwest onto 87 for a short distance, and then headed more directly north onto Lake Mary Road. We passed several trucks carrying quads used in hunting, and even saw a couple of elk in the back of pick-up trucks. Mostly we rode through forests with open meadows carpeted with green grass from the summer rains. 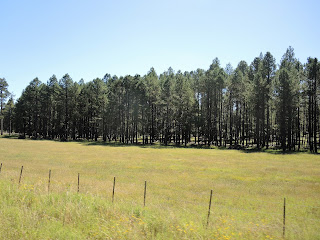 One of the grassy meadows is technically Mormon Lake, but the only water today was a large puddle perhaps the size of our house's footprint surrounded by boggy grass. Mormon Lake is the largest natural lake in Arizona, which says a lot about the water supply in our high-desert home.

Lake Mary, on the other hand, always has enough water for fishing and boating. That's because it's a reservoir, actually two reservoirs, built in the early 1900's for drinking water to supply Flagstaff. 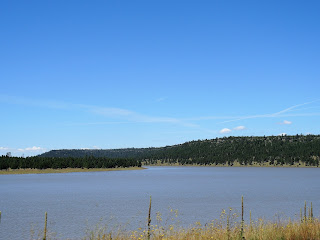 We didn't realize that there is a significant paving project on Lake Mary Road, and passed the time while we were stopped on the now one-lane road talking with another motorcycle rider. We swapped stories about the amount of time we've spent stopped for construction, riding in the rain and hail, and favorite local roads. 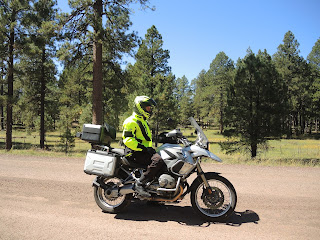 Lake Mary road eventually became a busy road when we reached Flagstaff, where we stopped at Tourist Home Urban Market for a fantastic lunch which included wild blueberry pie and a large loaf of pizza bread that we brought home.

The best part of the trip over, we chose the fast way home, riding south on I-17. At least the scenery is some of Arizona's finest - the red rock formations of Sedona framed by the white sandstone and limestone cliffs that I-17 climbs and winds through.

We've ridden this way several times, and each time I'm awed by the wide-open views, hawks lazily circling on the updrafts in the sunny blue sky, and the winding highway that leads us through scrubby high desert into the ponderosa-covered mountains. Every day we're on the BMW is a day to be treasured, even a familiar ride close to home.
Posted by Lynn Grieger and Mike Ryan at 7:00 PM