What were we thinking?

It sounded like a good idea:  ride north on curvy, little-traveled Vermont Route 30 to Middlebury, eat lunch, wind our way west into New York and then turn south toward home. 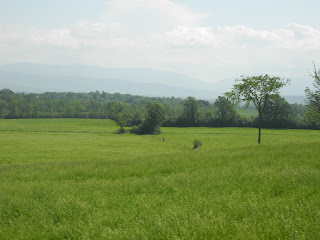 We purchased a sandwich in Middlebury at Noonie's Deli located in the historic Marbleworks area and sat outside at a picnic table watching canoeists brave the churning Otter Creek Falls. 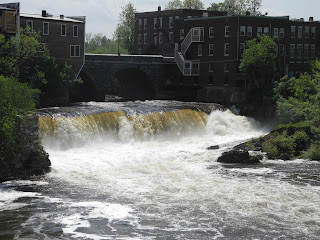 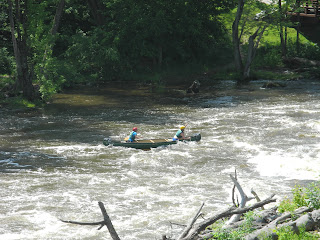 Sunshine, temperatures just right for a leisurely outdoor lunch, and the afternoon in front of us; our grand plan for the day was working out just as we expected.

Until we crossed into New York. Not that there's anything wrong with upstate New York; in fact, it's one of our favorite places to ride. The great idea soured as the skies turned dark and grey just as we crossed the Lake Champlain bridge that was completed in 2011. 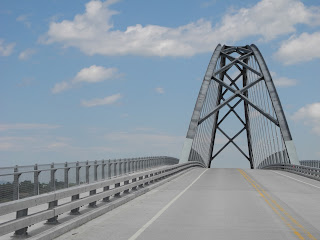 The blue sky and puffy white clouds look friendly enough, but soon after we turned south on to NY Route 9, everything turned black and raindrops started to spatter against my helmet. The temperature was in the high 80's, and the rain actually felt good. Until it started to rain really hard and the temperature dropped below 70 in less than 10 minutes. That's what our trusty Frogg Togg raingear is for, right? We stopped and put on the jackets, anticipating we'd soon ride out of the rain.

We were completely wrong. The ride started to unravel as we saw lightning and heard thunder. Motorcycles can be hit by lightning and we weren't taking any chances. We happened to be in Whitehall and Mike turned into a boat repair business, parked, and we ran inside the shop. We watched the rain pour from the sky as the lightning flashed and thunder rumbled for over 30 minutes.

When the lightning and thunder receeded into the distance, we set off for the final hour ride home. Mike used the GPS to take short-cuts which led us on back roads through Washington County into Granville, just a quick run outside Manchester and home.

As we pulled into our garage and started peeling off the Frogg Toggs, the sky lit up with lightning, thunder roared, and it rained so hard a small river roared off the roof onto the porch.

We have two days to dry out our motorcycle gear before we head for West Virginia and the Hatfield/McCoy marathon on Wednesday. Let's hope this great idea - to ride the BMW to West Virginia, run a marathon, and ride back home within a week - turns out as planned.


Posted by Lynn Grieger and Mike Ryan at 6:31 PM