We made it to Hatfield/McCoy country! 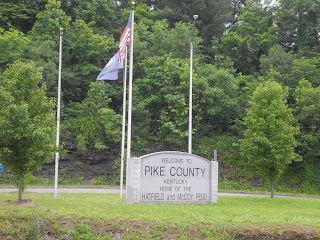 Hatfield/McCoy country straddles Kentucky and West Virginia, separated by the Tug River.  We rode about 4 hours today through intermittent rainshowers and arrived just after noon. Today we followed the GPS, avoiding highways, U-turns and toll roads which meant that we started off on WV Route 4 and then quickly turned off onto small, paved side roads. Since we've been riding in West Virginia I wondered what those side roads were like, and today we found out:  narrow, winding, and really, really steep. 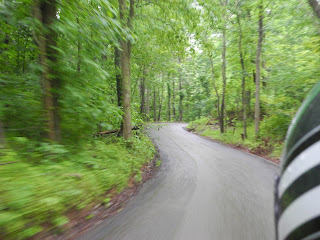 We hadn't gone far before a sign warned that the road was going to narrow - as if it wasn't already only one lane wide? Our driveway is wider than these roads, and it was fun to curve our way through the woods. We ended up back on route 4, following the winding Elk River, until we rode through
Charleston, the capitol and largest city in West Virginia.

Once through Charleston we took route 119, a 4-lane, limited access highway that crosses the rugged Appalachian Mountains that cover almost all of West Virginia. Periodically the rain stopped, the mist lifted and we gazed across the forested valleys and mountains. 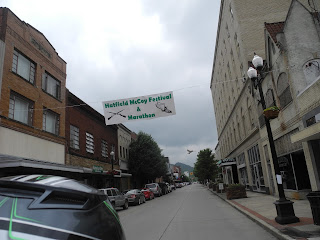 Williamson is a small city with friendly people who say hello as they pass by on the street. The marathon ends near our hotel, the Mountaineer Hotel, built in 1926 and on the National Historic Register. 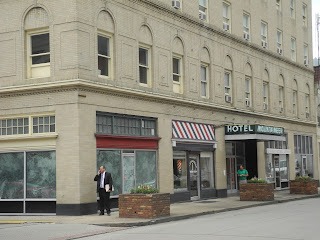 Many of the rooms are named for famous people who stayed here. We're in the Smiley Burnette room, named for the actor/comedian who starred in several Westerns with Gene Autry and had a recurring role in Petticoat Junction.

Tomorrow is the marathon and time to experience other local activities in the Hatfield/McCoy reunion weekend. We're ready for a rest day (of sorts, since I'll be running 26.2 miles) and then Sunday we head back home.

Posted by Lynn Grieger and Mike Ryan at 2:33 PM