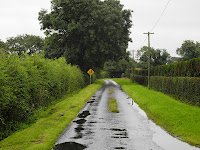 The wonderful guys from Celtic Rider arranged taxi service between our hotel in Dublin and their shop outside the city. Mike took our BMW R1200 GS﻿ on an orientation ride while I packed up everything we need for five days on the bike. The two side cases and the tail case hold only the essentials, and it's amazing what I can learn to do without for five days.

It was raining when we left Celtic Rider for today's destination:  the Ardlenagh View B & B in Donegal in the northwestern part of Ireland. Along the six-hour ride, I made a list of all the terms I knew for rain:

We experienced all of these except for the monsoon, which is a fairly typical day in Ireland. The wet weather didn't stop us from enjoying the lush green grass in the meadows, flowers, and hedgerows towering along the roadside so high we couldn't see over them. 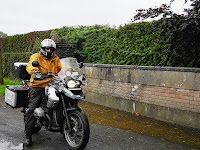 Mike set the GPS to avoid highways, which meant we traveled on roads barely wide enough for two cars, even narrower roads that comfortably allow one car to drive down the middle, and roads with grass gowing in the middle of the road, similar to many Vermont driveways but much narrower. These paved roads look like a bicycle path at home, and imagine the fun we have riding down these twisty lanes lined with hedgerows, trees and stone walls that block Mike's view of oncoming traffic.  Meeting a speeding car heading the opposite direction on a blind corner is not for the faint of heart! Mike's orientation instructor said that when the British ran Ireland, they took centuries-old wagon roads and dumped macadam into the ruts without any additional improvements, which evidently includes paving over the grass. When asked why they don't simply widen the roads, he said that would be solving the problem, and the Irish aren't good at that. It turns out that these narrow, winding roads are our favorites.

We arrived at our B & B home for the next two nights ready to change out of our wet raingear and head to dinner. Rob and Kelly, a couple from Canada, are on the 8-day Celtic Rider tour, which means we share the same itinerary for our first four days. Tony, the owner of the B & B, drove us into Donegal for dinner and highly recommended we attend the Slice of Ireland dinner and show at the Central Hotel. What an evening! Traditional Irish ballads mixed with drinking songs,  five musicians playing the guitar, accordion, fiddle, Uillean pipe, Irish harp, and bodhran (Irish drum); a guest performance from the Milwaukee Irish Fest choir who happened to be in the audience, two incredible Irish dancers from Riverdance, the 6 and 8 year old sons of one of the musicians who started the show with a ballad, and a local comedy duo rounded out the show. Everyone, the musicians and dancers included, was having so much fun the show continued longer than usual.

It was an incredible introduction to our Irish motorcycle tour and we're looking forward to more adventure tomorrow.
Posted by Lynn Grieger and Mike Ryan at 11:25 PM