We've been traveling for seven days on our BMW motorcycle, and today was the first day we had to break out the rain gear. The Midwest is in the midst of a terrible drought, with record high temperatures, almost dry creek beds, brown fields that are usually green, and deep cracks in the ground from lack of water. We've endured temperatures as high as 105.8 on the bike, and even purchased new mesh motorcycle pants to keep us as cool as possible.

It was cloudy and overcast when we left Valpo at 7am, and by 7:30 it started raining. The sky ahead of us was a solid mass of dark clouds, and we knew this wasn't going to be a short sprinkle. Mike pulled off the road so we could put on our Frogg Togg rain gear, and it was a good call:  a short time later the temperature dropped 15 degrees from 75 to 60 and it started to rain even harder. We rode in and out of rain for the next four hours, but we stayed dry. We've worn the Frogg Toggs in rain before, but this was the first test for our BMW Allround boots. Mike read a review of waterproof boots in Motorcycle Consumer News and these boots were one of the very few that were indeed waterproof according to their test. They met our test as well since our feet stayed completely dry. 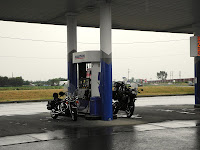 We stopped for gas and chatted with a Harley rider on his way from Cleveland, OH to Ft. Wayne, IN. We talked riding in the rain, travel by motorcycle, and attending motorcycle rallies before we headed East and he continued West. 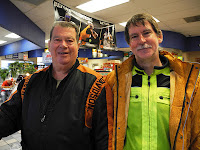 It was raining when we stopped for lunch, but when we came out the skies were blue and the temperatures increasing. We had clear blue skies and hot temperatures in the 90's the rest of the way to our destination:  Oil City, PA. We left flat farmland behind us in Ohio, and ended the day riding through the rolling, wooded foothills of the Allegheny Mountains.

You never know what you might see on the highway, but this was the first time we saw a helicopter. We keep reminding ourselves:  the point of this trip isn't the destination; it's the journey. 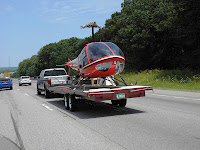