We left home at 5:30am to a pink sunrise, and 16 1/2 hours later pulled into a Holiday Inn Express in Charleston, WV just after sunset. It was the longest day we've ever had on the BMW but we wanted to put a lot of miles behind us on the first day of our trip to Sedalia, MO for the BMW rally. 750 miles, to be exact. States:  Vermont, New York, Pennsylvannia and West Virginia. Mountains:  Taconics, Catskills, Poconos, Allegheny. Temperature:  68 at home in Vermont; 101.4 on the Interstate in West Virgina, 86 degrees in Charleston. 4 stops for gas, 1 stop for lunch, 1 stop for ice cream. 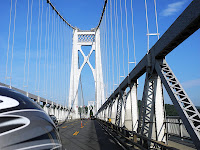 FDR Bridge over the Hudson in Poughkeepsie, NY﻿

Our goal is the 40th BMW MOA International Rally, about 1600 miles from our home in southwestern Vermont. We have 3 days to get as close to Sedalia as we can, planning to arrive at the rally mid-morning on Friday.

Putting in a lot of miles today sounded like a good idea when we did our initial planning. We were frustrated with plotting a route primarily on smaller roads, trying to stay off the Interstate system as much as possible. I tried several websites, Mike attempted to load the final version into the Garmin but ended up having to plot it all over again, and we finally relied on a huge fold-out map of the US. We learned along the road that the Garmin has a mind of its own, routing us onto 87, the busy Northway. We got off at Exit 16, only to find ourselves in Kiryas Joel, a community of Hasidic Jews near Woodbury Common outlets. We rode past broken-down three and four-story apartment buildings; groups of men wearing black suits and white shirts waiting at the bus stops; and women dressed in long skirts and brightly-colored head scarves outside with their children. Unlike other towns, none of the children smiled or waved as we rode past. It was depressing and eerie, and a wholly unexpected detour.

We finally rode into Scranton, PA and stumbled upon the Moosic Diner. I love stopping at local restaurants, and when we saw four motorcycles parked out front, we knew we found a special place. 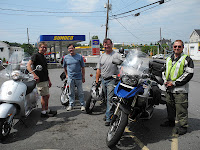 Two of the guys live north of Philly and were headed to Ohio for a classic bike show. The other two live in the area, and gave us tips on the next section of our journey. Good thing, because by this time we had no idea what route the Garmin chose for us. After exchanging stories about favorite roads and scary things that happen while riding a motorcycle, we set off for a hot afternoon riding through Pennsylvania and into West Virginia. 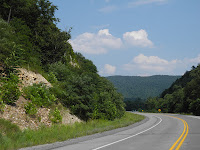 We were ready for the heat, but weren't expecting the twisting roads through the mountains. I told Mike the scenery reminded me of Vermont, and the guy we met at dinner agreed. He has relatives in the Northeast Kingdom of Vermont, and the first time he visited he told them it looked just like West Virginia. We traveled 750 miles and the scenery at the beginning of the trip was almost exactly the same as the scenery at the end of the day. Small world.

Our goal for this trip is to have fun and experience new adventures. We accomplished both today.
Posted by Lynn Grieger and Mike Ryan at 9:26 PM