Time doesn't move at the same speed on a motorcycle vs driving a car. We spent 11 hours Friday and 10 1/2 hours Saturday on the BMW but it doesn't feel like we spent almost half of the day riding.  My legs may get tired from sitting in the same position, but while we're riding it almost feels like time is suspended as I watch the scenery and the road speed by.

470 miles today took us from the steep forested hills and sweeping turns of the Allegheny Plateau in Pennsylvania to the straight and flat roads through fields of corn and soybeans in Indiana. Inbetween we endured 3 hours of hard rain in Ohio before the skies cleared and the sun came out just after we stopped for lunch. 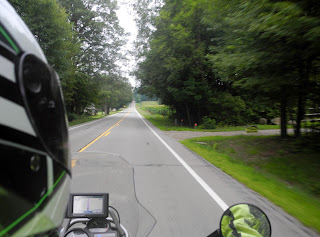 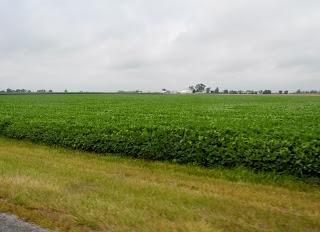 I've almost forgotten what it's like to ride for hours on a road that rarely swerves from a straight path. Some people think that the scenery in the Midwest is boring:  mile after mile of farmland interspersed with a small town every 15-20 miles. Yet riding through the Green Mountains or the twisting roads of the Adirondacks involves repetition:  mile after mile of forests, mountain climbs and descents, and a small town every 15-20 miles.

Perhaps because I grew up in the Midwest, I love riding along flat roads where the horizon stretches miles in front of me. I watched the sun move in and out of the clouds, hoped the dark and foreboding rain clouds stayed far to our north, and saw the shadows from the clouds move across the fields. Because I can see so far into the distance, I could watch the grain elevators that mark a town's location gradually come into view, looming larger as we got closer and then flashing by too quickly for me to read the name of the company on the side of the buildings.

Mike said the roads were so straight, he felt like he could put the BMW on autopilot. He did anything he could to amuse himself: checking the tire pressure, switching screens on the GPS, counting the farmhouses, passing as many cars and trucks as possible.

Mike was the first to spot a row of wind turbines in the distance, and as we rode closer to Van Wert, OH there were too many turbines for me to count. The strong wind that buffeted us on the motorcycle powered wind turbines stretching out on both sides of the road. The Blue Creek Wind Farm generates 304 megawatts of electricity with its 152 wind turbines that tower 476' above the ground, dwarfing even the tallest grain elevators. 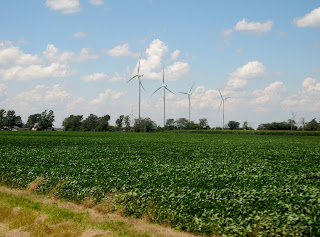 We turned north on Route 421, riding through towns familiar from my childhood traveling to high school basketball games with my father as he scouted teams, and eating countless fish dinners at school fundraisers with my family:  LaCrosse, Wanatah, San Pierre, Kouts, Knox. Signs on the road pointed to LaPorte where I worked for 5 years and our youngest son was born; Westville where my grandparents lived and we built our first house; Michigan City where Mike worked at B&E Marine and our oldest son was born. Route 30 heading into Valparaiso is almost unrecognizable, even though I was born and raised here and Mike and I lived in this area for 7 years before moving to Vermont 22 years ago. It's disconcerting to feel like a stranger in the town where I rode my bicycle, learned to drive, and graduated from high school.

At the end of the day's miles my raingear was dry from the wind and the sun but my supposedly waterproof gloves were still soggy. Mike's t-shirt and shorts never did dry out since he takes the full force of the rain. We pulled the BMW into my stepmom's garage and spent the evening catching up with Val and enjoying her company.

Next up:  Illinois and on to Iowa!

Posted by Lynn Grieger and Mike Ryan at 4:45 PM