Our youngest son registered for a longboard race in Windham, NY and the weekend forecast was for sunny skies. Time for a motorcycle trip! We always choose to take the scenic route, skipping interstate highways and hoping to stumble upon something unexpected. We weren't disappointed.

We headed south down familiar 7A to Bennington, VT, then just over the New York border turned left onto Route 22 through small towns separated by wide expanses of farmland. It was a warm, sunny day with a clear blue sky that made for a gorgeous ride on the bike. When we crossed over the Mass Pike, I was really glad that we chose lightly traveled, 2-lane roads instead of the faster interstate. After about 1 hour on 22, we turned west onto Route 23. This was our first time on these roads, and we enjoyed the views of the Catskills in the distance.

Traffic increased as we neared the Rip Van Winkle bridge over the Hudson River. Built in 1933-35, the bridge is just over 5000 feet long and is the only river crossing for several miles. Every time we cross the Hudson, I think about Henry Hudson sailing into Hudson Bay in Canada in 1609. His trip was financed by the Dutch East India Company, and many of the towns and rivers reflect the Dutch heritage:  Amsterdam, Cauterskill, Watervliet.

﻿ As soon as we crossed the bridge, references to Rip Van Winkle popped up on billboards and businesses. Washington Irving wrote the stor, set in the Catskills in the time around the Revolutionary War, in 1819. The Catskills became a popular vacation spot for New York City dwellers, and tourism remains strong today. The Catskills are a beautiful location for travel by motorcycle, with smooth paved roads that wind up and around the mountains and lots of options for food and lodging.

In just a few miles the divided highway narrowed back down to comfortable, winding two lanes. We crossed numerous creeks and streams, but were surprised by the red color of this one in the town of Jewett. 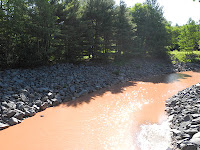 We used the GPS to find our hotel in Tannersville, a town of around 500 people that caters to Orthodox Jewish families in the summer and skiers in the winter. We stayed at the Villa Vosilla resort located within walking distance of several restaurants, shops, and bars in downtown Tannersville. You know you're in a small, rural town in the middle of the mountains when you see a mother deer and her frolicking fawn walking around the lawn on your way to dinner. 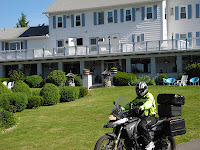 ﻿The resort owners were kind enough to let us check in at noon and leave much of our gear so we could ride the 12 miles to the Windham Mountain ski resort and the site of the longboard race. 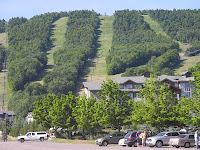 A longboard is basically a longer skateboard, designed for fast travel. There were 170 amateur and professional skateboarders and street luge riders in the two-day competition, and Nate took first place in the amateur division. 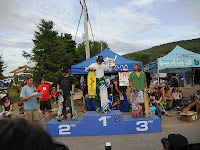 Watch several of the skateboarders as they scream through the final turn heading into the finish. Nate shows off his winning form in this video; he's the first rider in the bright green leathers.

The race ended at 6:30pm, far later than we anticipated. We had a 3-hour ride home in front of us with the weatherman calling for rain starting around 9pm. Riding at twilight along the hilly, winding roads through the Catskills was a completely different experience from the sunny and bright drive the day before. The rain started just as darkness completely enveloped us, but instead of a steady downpour it would rain for 5 minutes, stop for 10-20 minutes, and then start raining again. We opted to keep going instead of stopping to put on rain gear and pulled into the driveway before the worst of the rain hit.

A trip on the bike close to home yet in an area new to us, two sun-filled days watching Nate longboard down a mountain, crossing the wide Hudson River on a famous bridge and stopping to admire a clay-red stream in a remote section of the Catskills, heading west at night with the dark Taconic Mountains guiding us home.
Posted by Lynn Grieger and Mike Ryan at 6:29 PM