Mike channeled his Irish heritage on the Aer Lingus flight. It was fun to hear the Irish accents of the crew, and they spoke Gaelic for some of their greetings and security instructions. The flight was packed, but it was only 5.5 hours. We left Logan at 6:40pm and arrived in Dublin at 5:20am Irish time (5 hours time difference).
It’s not surprising that it was raining in Dublin, but the sun peeked out long enough for a large rainbow to form over the runway. Airport security involved a long line, but the Irish security were friendly and efficient. We had a lot of fun reading the signs in both Gaelic and English. One of our favorites:  Ní cheadaítear grianghrafadóireacht which means "no photography allowed". Of course I wanted to take a picture, but settled for one of the plane instead: 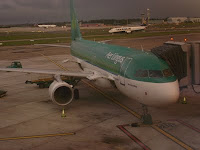 We then walked through what seemed to be a big shopping mall to get to our connecting flight to Munich. At times we felt like we were back in Disney World, where to exit every attraction you’re forced to walk through shopping area.
We flew out of the Munich airport several times when we lived in Germany, and were always impressed with the amount of security from armed police, often with dogs in tow. Today security was minimal:  a friendly policewoman checked our passports, we picked up our luggage, and that was it!
It’s raining and cool in Munich, but that didn’t stop us from taking the 35-minute S-Bahn train from the airport to within 2 blocks of our hotel.
Imagine our surprise when we got off the S-bahn and met a couple carrying the same helmet bags as us! Eric and Catherine are from Ottowa, and this is their first motorcycle tour as well.
We’re staying for 3 nights at the Hotel Concorde, a small family-run hotel on a winding and narrow side street, close to the Isartor, one of the remnants of the original city walls built between 1285 and 1347. The room is just as we remember hotel rooms in Germany:  small yet very clean with friendly and helpful staff.
It’s time to unpack our bags and explore!
Posted by Lynn Grieger and Mike Ryan at 6:49 AM