Off the beaten path

It was 85 degrees at our house when we headed out on the bike this morning. 20 minutes later we were on the Kelly Stand Road with temps in the mid-60's. The combination of elevation, dirt road, no traffic, and riding through the middle of the Green Mountain National Forest provided a welcome reprieve from July's heat and humidity.

The Kelly Stand Road is one of the old throughways that you often find when wandering around Vermont. Once a major route between the towns of Arlington and Stratton, today it's primarily a recreational dirt road on the Arlington side, and paved once you get onto the Stratton side. Tourists sometimes try to navigate the road in winter, only to find to their dismay that snowplows don't maintain this road. It's a good thing the local rescue crews are adept at pulling stranded flatlanders out of the snow and mud!

In the early 1800's the Kelly Stand Road was a popular and busy route. So popular, that on July 7, 1840 Daniel Webster, Senator from Massachusetts, spoke to an estimated 15,000 people during a Whig convention supporting William Henry Harrrison's presidential candidacy at a spot on the Stratton side of the road. Today, about 1300 people total live in Arlington and Stratton combined. 170 years ago, ten times that number of people came from miles around to hear a politican speak in the middle of the woods. Newspaper accounts describe the road even then as 'rugged', that a procession of people came a 'distance of 8 miles with their banners flying and bands of music playing lively airs', and that 'only one farmhouse was seen for miles around'. Why in the world they chose this remote spot is beyond imaging. Today a boulder with a bronze plaque marks the spot where the gathering occured. When we visited, there were two tents pitched in that same field - not quite the 15,000 of history! 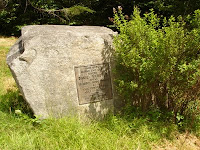 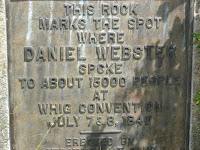 Pick up the Kelly Stand Road in Arlington just off North Road, or in West Wardsboro where it intersects with Route 100 (the road is known as the Arlington-Stratton Road on this side). We continued north on Route 100 through the small classic New England towns of Wardsboro Center, Wardsboro, East Jamaica, Jamaica, South Londonderry and finally into Londonderry. Vermont likes to use the same name over and over for closely linked towns, differentiating them only by map location.

We were in luck because by the time we drove into Londonderry we were hungry, and the legendary Londonderry farmer's market was open for 15 more minutes. We couldn't carry fresh vegetables, cheese, or bread made by our neighbors, so we settled for delicious burritos and ice-cold, fresh-squeezed lemonade enjoyed at a picnic table in the shade.

One more treat was in store for us before we wound our way down the mountain toward home. A combination of expected and unexpected fun is a large part of what I love about riding on the BMW. You'll have to wait to read the rest of the story for the next blog post! Be sure to check out the video of today's ride!
Posted by Lynn Grieger and Mike Ryan at 4:35 PM