Sweating for 8 hours in Alabama, Florida and Georgia

We knew it was going to be a hot and humid day when the humidity was 99% at 5:30 am when I went for a run. The sun wasn't even up yet, and I started sweating while I was stretching before the run. We left at 6:45 am to try and beat most of the heat and traffic, but it took us over an hour to get through the traffic in Alabama and the Pensacola Florida area. 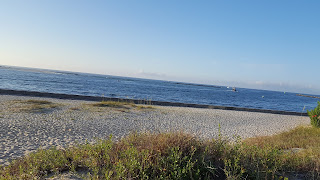 We talked with the motorcycle riding owner of Mikee's Seafood restaurant in Gulf Shores last night about a spot to get a good photo of the BMW next to the beach, and he suggested an area right before the Perdido Key Bridge. 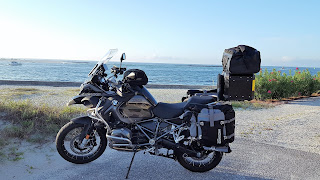 Soon after this photo we crossed into Florida, our 8th new state on this trip. We wound our way through busy shopping sections of Pensacola until we finally found U.S. 29 north which thankfully took us into farmland with very little traffic. We followed U.S. 29 our entire trip today, except for a 16 mile section on I-85 in Auburn. Typically we avoid the interstates, but today we decided that riding faster would give us some cooling breeze vs stop-and-go traffic through the city.

Not long after we left the city traffic behind and were enjoying the quiet country highway, I was looking at the sky off to the side when Mike jumped. A large animal ran across the road in front of us, and after he processed that it wasn't a deer, he insisted that it looked just like the mountain lion in the rescue zoo at home. Mountain lions in Florida? In the hotel that evening he looked it up, and is certain that he saw a Florida panther. According to the Defenders of Wildlife, Florida panthers typically are found only in southern Florida, but occasionally a young male is spotted as far north as southern Georgia/Alabama - which is exactly where we were riding.

We were in Florida for about 50 miles, and then U.S. 29 took us back into Alabama. The scenery today looked very much like yesterday, with trees or farmland on both sides of the 2-lane, mostly straight highway. We kept our eyes out for kudzu, an invasive perennial vine that completely covers every available surface, sometimes even growing into the highway. 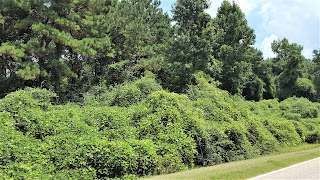 The elevation gradually increased from sea level until we were riding on rolling hills, going up and down northeast through Alabama.

We did our best to stay cool as the temperature continued to rise by stopping every couple of hours to share a bottle of cold water and run our neck coolers under water in the gas station bathroom. We even lingered over lunch in a Subway in Union Springs just to enjoy the air conditioning. As long as we were moving, at least the air movement felt somewhat cooling.

When we were stopped for 15 minutes for road construction, we were frustrated and sweating until we watched an enterprising couple with a mobile BBQ sell a sandwich to the flagger. We might have purchased a sandwich ourselves except the pilot car came by and it was our turn to drive through the construction zone. 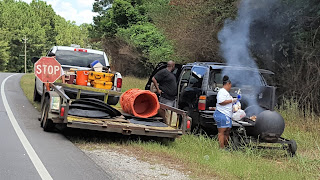 After 8 hours on the road we ended our day in LaGrange, Georgia, just a few miles over the state line from Alabama in the foothills of the Piedmont. We're hoping for cooler temperatures tomorrow as we head north into the mountains, riding into our 10th new state:  Tennessee.  Here is today's route