Gorgeous ride through rolling hillsides in NY, Pennsylvania and Ohio

It's hard to believe this is our 26th day on the road because we're having so much fun traveling around the country. Today I started with a morning run in Springville, NY where I found the beautiful rail trail for part of my run. We left at 8am under sunny skies with perfect motorcycle temperatures in the high 50's. 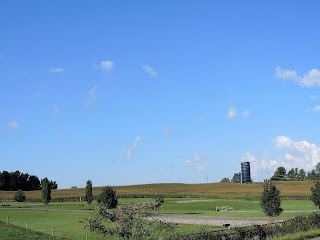 We rode about 2 hours through western New York state through rolling hills and farmland, then another 2 hours through Pennsylvania, using our Garmin GPS system to guide us. 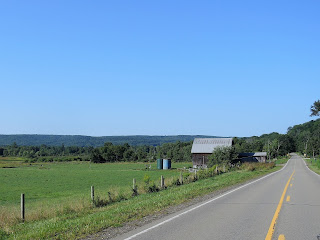 Using the Garmin takes off the pressure of creating a route and then making sure we stay on that route because Mike simply follows the Garmin's directions. If we miss a turn because we're admiring someone's beautifully landscaped lawn, or pointing out an Amish man walking along his fields, the Garmin simply recalculates and keeps us headed in the right direction.

We reached Ohio, our last state for the day, with about 2 hours left in our trip. I was curious about the origin of the name "Ohio", and discovered that it originates from the Seneca ohi:yo' which means great river or large creek and was their name for the Ohio River. Ohio became a state in 1803, the first state partitioned from the Northwest Territory. That explains why the historical signs in the towns we passed through listed dates in the early 1800's for the original settlement. 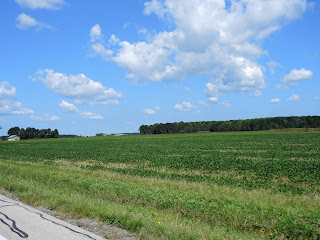 Mike describes the rolling hills as 'whoops' because he enjoys speeding up just as we crest the top of the hill so that our stomachs jump and we 'whoop' with the fun of zooming along the lightly traveled roads through the midwestern farmland.

We saw Amish horses and buggies, a couple of Amish children playing in their yards, an Amish man walking along his field, and another Amish man riding a horse along the 2-lane paved county road throughout the day. The Amish church started in the late 17th century in Switzerland, and in the 18th century Amish started emigrating to the United States. We challenged each other to point out Amish farms, notable because of the lack of cars, tractors, electric lines, and TV antennas or satellite dishes. 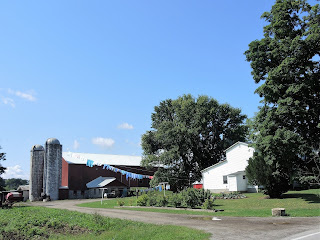 Today's ride was simple and calm with mostly straight roads up and down the rolling hills, with an occasional sweeping turn through farmland, or a sharp turn as we passed through several small towns. We had time to notice the old overgrown apple orchards along the roadside, vast green lawns that must require hours of care each week to maintain, decades old barns and farm houses that are gradually falling apart and becoming overgrown by weeds and trees, lakes overgrown with weeds as well as bright blue lakes dotted with boats, the signs in what seems like every town identifying their 'historic downtown' and the big cumulus clouds in the sky.

Tomorrow we continue west into Indiana and look forward to visiting my stepmother for the night. We're always attuned to the weather forecast and plan to leave early to hopefully miss the predicted rain and thunderstorms that are headed our way.  Here is today's route

Posted by Lynn Grieger and Mike Ryan at 6:12 PM