Today was a day of contrasts:

We started at 10 am under cloudy, grey skies with temperatures hovering just below 60 degrees.4 hours later we peeled off long sleeve shirts and jacket liners as we rode south toward Las Vegas under a bright sun with the temperature in the mid 90’s. 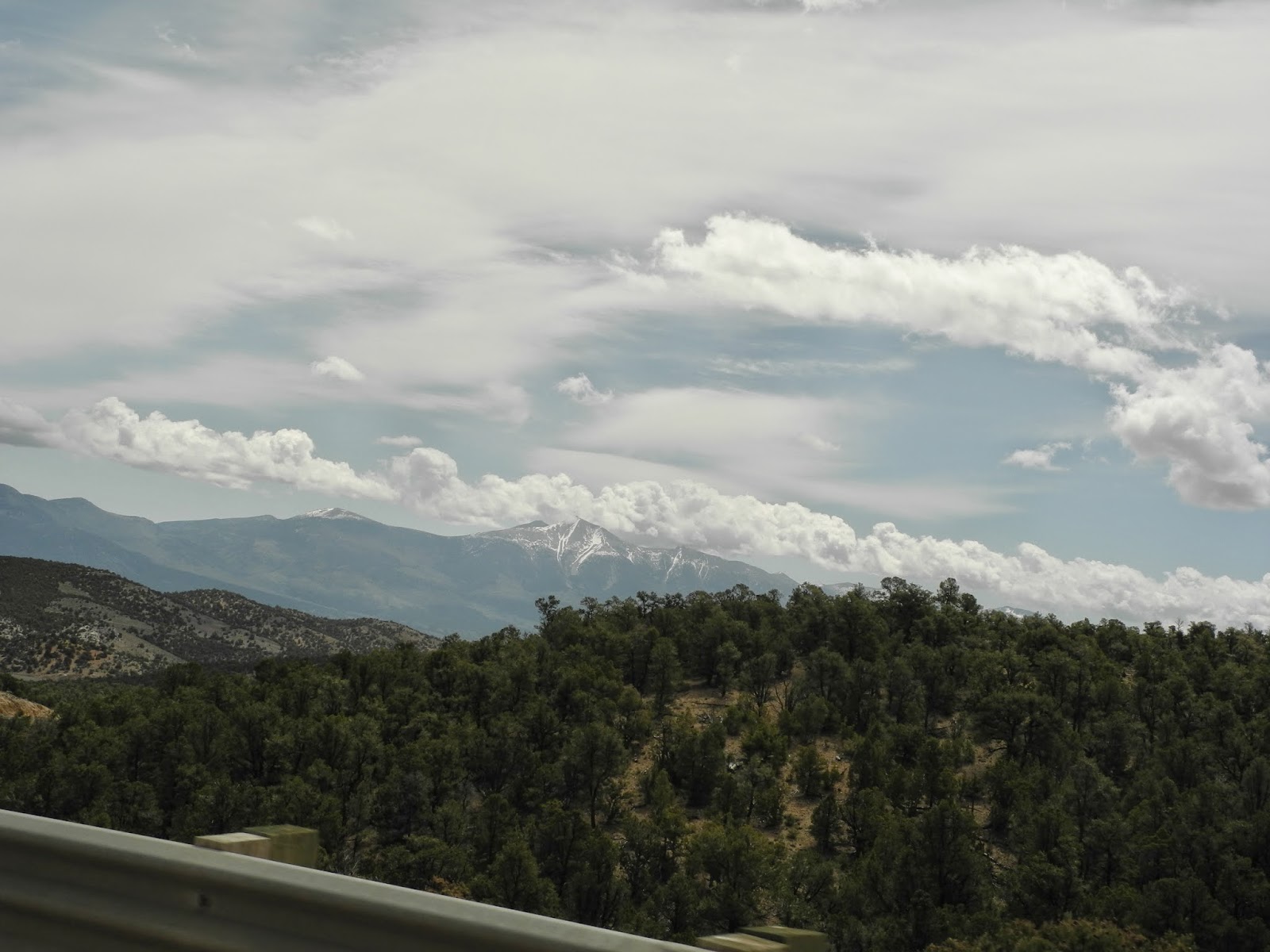 US 93 near Ely, NV in the Humboldt National Forest

Most of the day we rode for miles without seeing any traffic, and at one point traveled 113 miles between towns. Then we rode into metropolitan Las Vegas, skirting as much of the city as possible but still riding in 4-lane stop-and-go traffic. 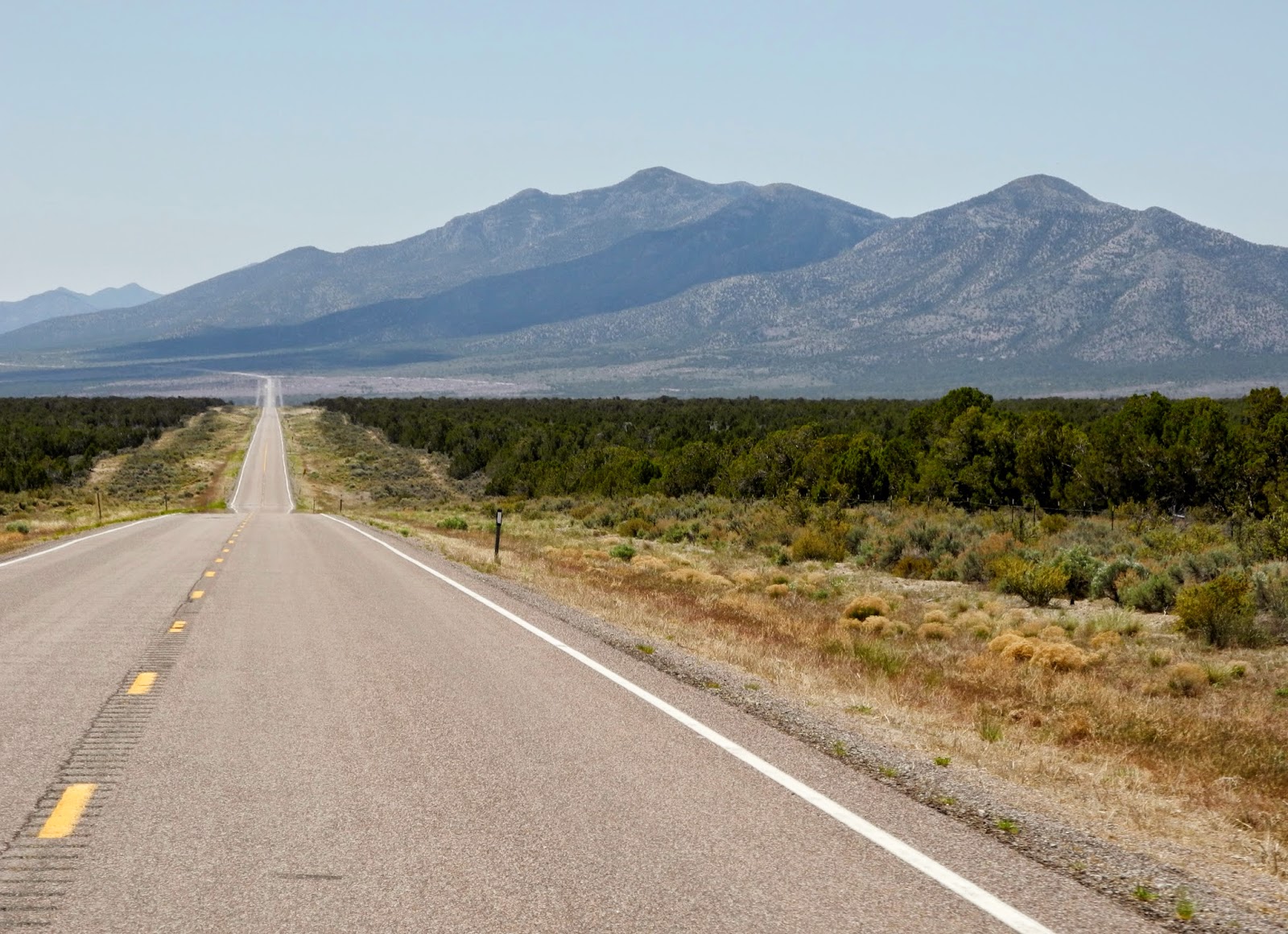 At times the flat desert landscape was covered with green sagebrush, then we swept around long curves through rocky bluffs, passed bright blue lakes and swampy areas, rode through what looked like large mounds of gravel, slowed down to take in the pitted, towering red rocks in the Valley of Fire, and rode through the canyons in the Lake Mead National Recreation Area. All of this in Nevada!

We traveled 490 miles today, starting in Ely (which I learned during a conversation with an elderly gentleman during a gas stop in Panaca is pronounced “Eee-lee”; he also told me he talks with many tourists from all over the world who enjoy learning about the American southwest, and that the Italians are most interested in finding the whore houses) and riding south to Kingman, AZ.

I never tire of looking at mountain ranges, many of them topped with snow. The majority of this week-long trip we became used to the desert landscape with sagebrush and scrawny pinyon pines, and then were surprised today by the Pahranagat lake and swampy wildlife reserve that seem out of place in dry Nevada. The spring-fed lake in the Mojave Desert is home to thousands of birds on the Pacific Flyway migration route. 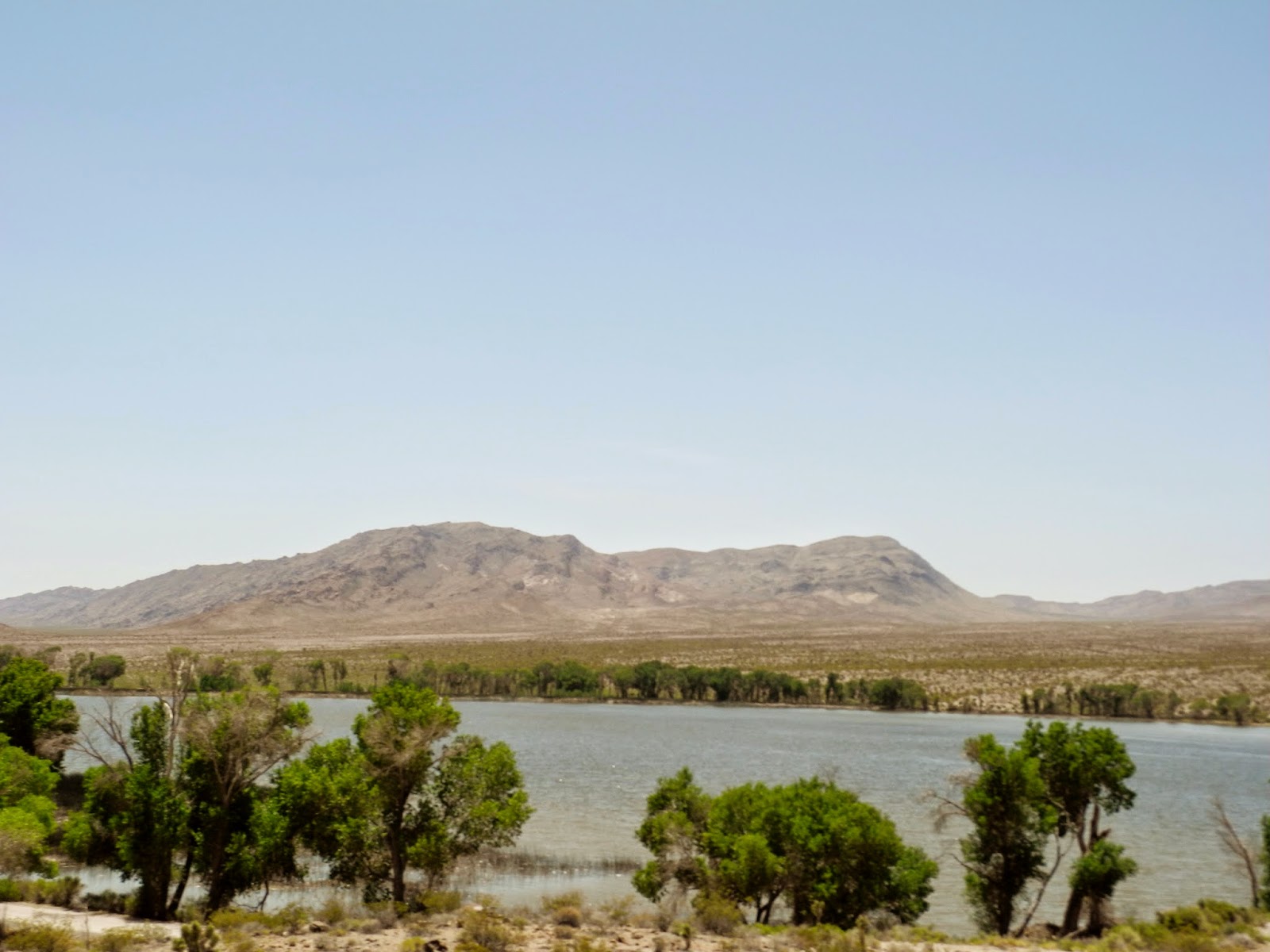 Mike planned a route around Las Vegas that took us through the Valley of Fire, the oldest state park in Nevada. It takes its name from the deep red sandstone formations formed 150 million years ago from sand dunes followed by uplifting, faulting, and erosion. 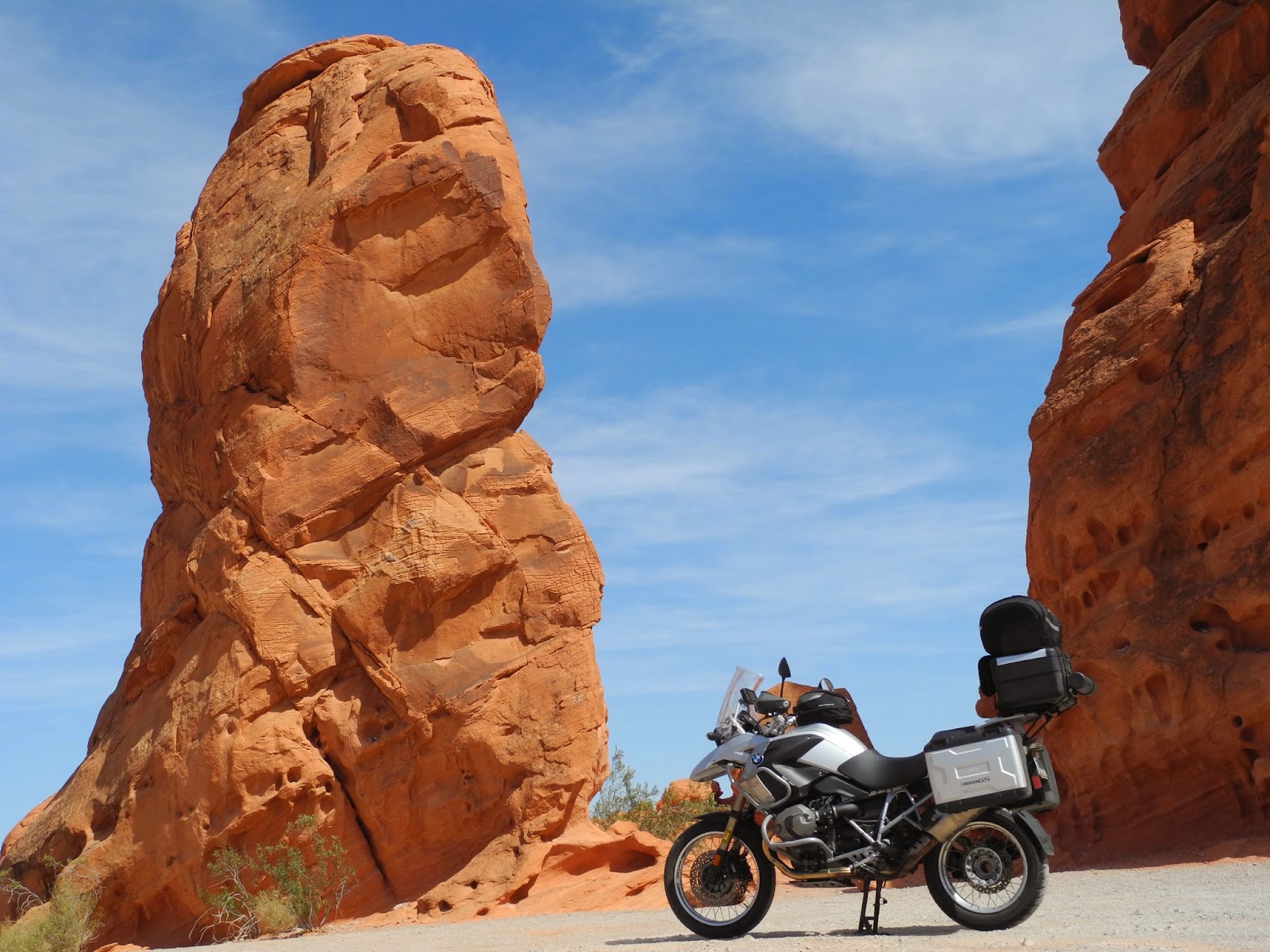 We've been through red sandstone formations in Sedona, AZ near our home, but the Valley of Fire is even more impressive because of it's size and wide open spaces between the towering red sandstone cliffs.

ride through the Valley of Fire

This is a perfect time of year for a visit to the park:  we saw only 3 cars along the 10.5 mile road which gave us time to ride slowly and pull over to the side for photos.

The 2,337 square mile Lake Mead National Recreation Area joins the Valley of Fire, and we caught glimpses of the lake as we rode along the Northshore Road. This is a desert landscape of canyons, bluffs and cliffs, and in fact three desert ecosystems meet here:  Mojave, Great Basin, and Sonoran. 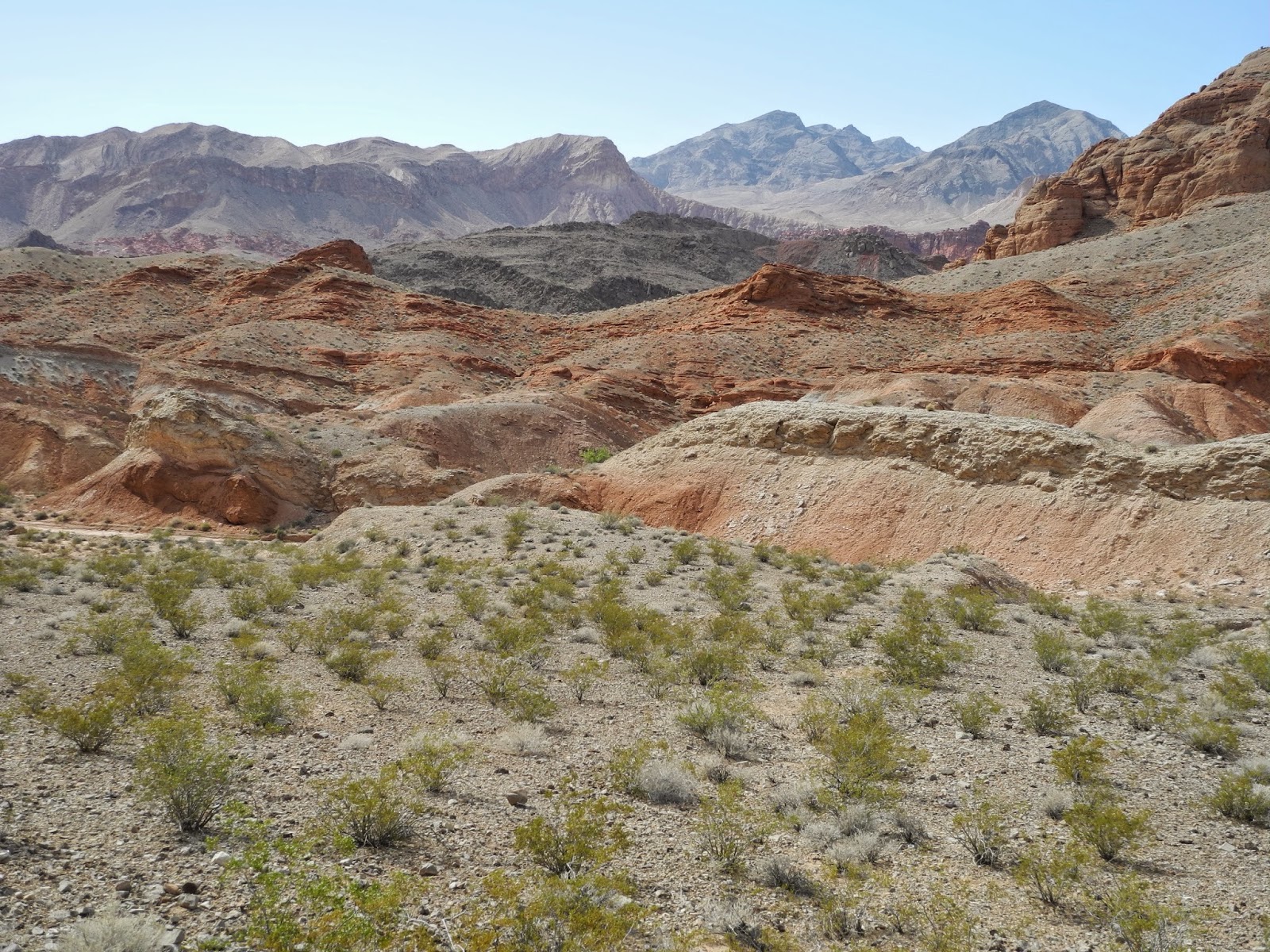 It was a shock to my system to leave the quiet desert and turn onto 4-land highways around Las Vegas. We crossed the Hoover Dam on the new US Route 93 bridge into Arizona, and rode the last hour into Kingman. We stayed in a hotel right on the old Route 66, and learned from the trivia on the restaurant menu that Clark Gable and Carole Lombard eloped here in 1939.

We ended the day with one more contrast:  last night we stayed in small, rural Ely, NV and tonight we're in busy Kingman. With 28,000 people, Kingman is nine times larger than Ely. Both are county seats, yet worlds apart.

Posted by Lynn Grieger and Mike Ryan at 7:34 PM