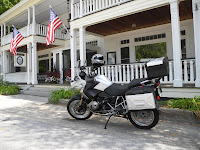 Mike was hooked: after riding a BMW R1200 GS last year on the ROADRunner 5 Country Tour and last month in Ireland with Celtic Rider﻿ he decided it was time to replace our F800 GS with a more powerful 2012 model. Mike has been on the new bike a few times, and this weekend was our first opportunity to try it out together.

Mike of course knows all the differences in the engine, specs, handling, etc.:  all the techy stuff that I know nothing about. The only difference I truly notice is that I sit up higher and the side bags are positioned a bit lower. As long as Mike is happy with the motorcycle, I'm content simply to ride along behind him taking in the scenery and pointing out ice cream stands that demand we stop.

Our loose plan today was to ride north on scenic Vermont Route 100, winding our way to Stowe and eventually circling back south toward home. Route 100 is a beautiful ride any time of the year as the road winds along the eastern side of the Green Mountains passing through farmland and small towns. This time last year Hurricane Irene slammed into our state causing massive flooding that destroyed bridges, roads, houses, and farms. The smooth new pavement repaired most of the damage, but we're awed by the still visible signs of the immense power of the water. 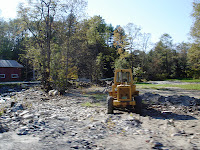 We enjoyed little traffic and open roads during the early part of the ride, but the closer we came to Stowe, the more traffic we encountered. The backdrop of Mt. Mansfield, Vermont's highest mountain at 4395', the old center part of Stowe, and the stores lining the Mountain Road make it a favorite tourist destination. 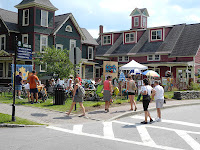 Our true goal in Stowe was to drive the Notch road, the narrow, twisty mountain pass road that goes over Mt. Mansfield connecting Stowe to Jeffersonville, home of Smuggler's Notch ski area. The Notch road isn't plowed in the winter, trucks are forbidden, and every so often motor homes get stuck because they're too long to navigate the tight corners. The road narrows to one lane, with trees and mountain rocks closing in on both sides. I hung on tight to Mike as I twisted around to look in every direction. Mike has a great sense of direction in Vermont since he grew up here and either for work or fun has driven most of the roads. We headed in a southeasterly direction, confident that eventually we'd find both ice cream and Vermont Route 14 north of Montpelier, one of Mike's favorite motorycle roads. Luckily we stumbled across an ice cream stand with 64 flavors, where we chatted with a friendly couple from Essex Junction riding a 1978 Honda Gold Wing. 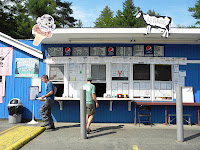 Mike often accuses me of falling asleep on the bike, and today he was right. The combination of warm sun, comfortable motorcycle, smooth roads and a stomach full of triple berry ice cream made me nod off periodically as we rode along the White River and back through Rutland to home.

Posted by Lynn Grieger and Mike Ryan at 4:42 PM