Home through the mountains

We started the last day of our Bisbee trip in Show Low, a town of about 10,000 people at 6200' elevation in the heart of the White Mountains on the Mogollon Rim. According to local history, Show Low received its name based on the outcome of a card game. Sometime around 1876 two neighbors in the Show Low area decided the region wasn't big enough for both of them, so they played cards to decide who would leave. One of them told the other:  If you can show low, you win. Of course that led to the person with the deuce of clubs 'showing low'; he won the bet, and the town was named Show Low. If that isn't enough, the main street is named Deuce of Clubs.

This part of Arizona is known as Rim Country, and it's popular in the summer for folks in Phoenix who want to escape the baking heat in the Valley of the Sun, and also popular in the winter for the snow. 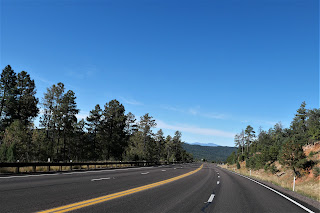 We started a bit later than usual because the temperature was in the 30's at 7am. I put on just about all of the clothes I brought with me, plus all the liners for my motorcycle jacket, and added raingear for extra warmth. It's days like this that a heated seat would be heavenly! Typical for Arizona, the bright sunshine warmed up the air so the temperature was tolerable, but I never took off any of my warm clothes as we rode from Show Low west to Payson at elevations around 7,000'. 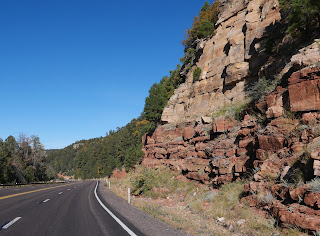 It seemed like Monday was a popular day for people driving slowly, erratically, talking on their phone, texting - or all of the above at one time - to be on the road. Periodically we were able to take advantage of passing lanes on the curving 2-lane road through the mountains, zooming past the slower moving trucks and cars. 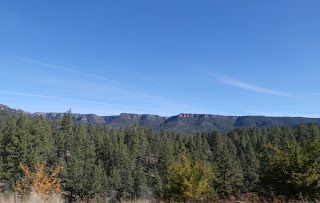 US 260 descends several thousand feet over a few miles into Camp Verde, giving us gorgeous long-distance views of the Mogollon Rim and the nearby grasslands. 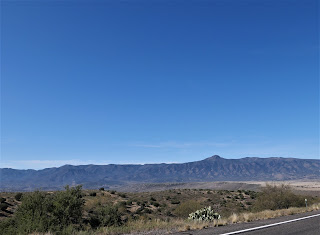 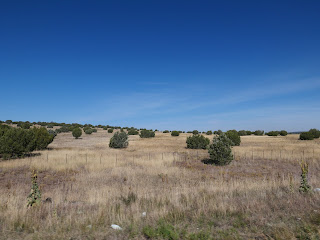 We were close to home now, with only a short stretch south on I-17 then about 30 miles on 169 into Prescott Valley and a few final miles to our home in Prescott. We rode 930 miles this weekend on a looping trip to Bisbee, exploring twisty mountain roads with technical hairpin turns on the Coronado Trail and enjoying riding other, more familiar roads. The BMW is our favorite way to travel, and we're planning more trips soon.
Posted by Lynn Grieger and Mike Ryan at 3:50 PM