Finding the craic in Dublin

We're back in Dublin for 2 days before we start part 2 of our Ireland adventure - hiking! While we love riding a motorcycle, it's fun to include something more active as part of our vacation.

Saturday we spent 2 incredible hours at EPIC, The Irish Emigration Museum.  It's only been open about 18 months, and features 20 interactive galleries that explain why millions of Irish emigrated over the years, and how the Irish emigrants influenced other countries, including our own. Mike, Wayne and Colleen have Irish ancestors, and watching the stories of people who decided to leave Ireland due to famine, economics, or lack of opportunities was both heart-wrenching and inspiring as we learned how they created incredible lives for themselves out of often horrible circumstances.

Outside the museum is a group of bronze statues depicting people during the potato famine in 1845-1850 when 1 million Irish died from hunger or disease, and another 1 million emigrated. In 1840 there were about 8 million people in Ireland, and by 1871 after the famine and emigration there were only 4 million residents. The population has been under 8 million since 1840, with current population at about 6.6 million. 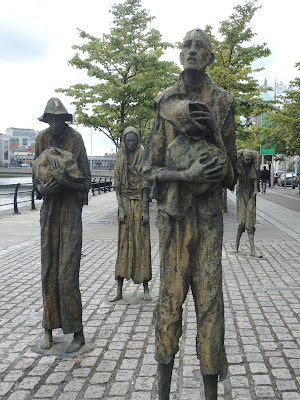 Sunday was a busy day with the Rock n Roll half-marathon for me and the 10K for Mike, Wayne and Colleen - the first race ever for Wayne and Colleen! We ran through the streets of Dublin with a band playing about every mile, finishing in Phoenix Park which at 1762 acres is the largest park within any European city. It was established in 1662 as a royal deer park, and there are still deer living within the park. The Irish president and US ambassador to Ireland live within the park, and the park also contains statues, monuments, and the Dublin Zoo.

On our way back to the hotel after the race, we stopped for lunch at the Brazen Head, Ireland's oldest pub. It was established in 1198 and is a delightful warren of low-ceilinged, dark rooms with advertising memorabilia from centuries of beer, whiskey and other types of alcohol on the walls. 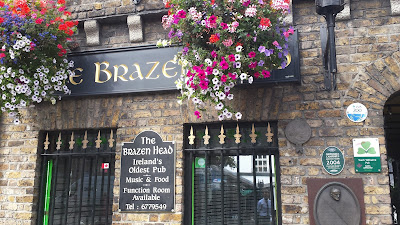 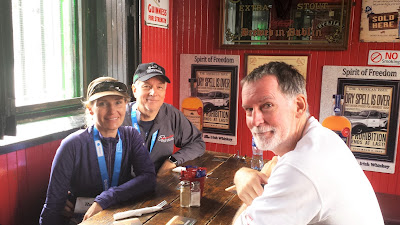 In the afternoon we took a tour of Kilmainham Gaol, built in 1796 as the Dublin County Gaol and operating until 1924. It depicts the history of the Irish struggles for independence from Great Britain, especially during the 1916 uprising where 16 of the leaders of the rebellion were executed within Kilmainham Gaol. The uprising and executions eventually led to Ireland declaring independence and the treaty in 1921 that established the Irish free state and Northern Ireland. 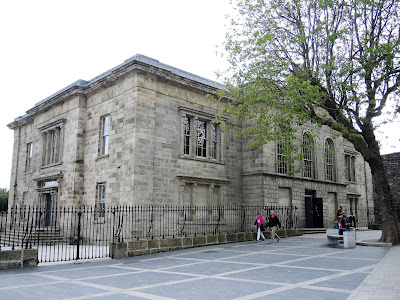 We immediately recognized the interior of the Gaol which was used in the original Italian Job movie, and could imagine Mr. Bridger walking down the stairs to the cheers of the inmates. 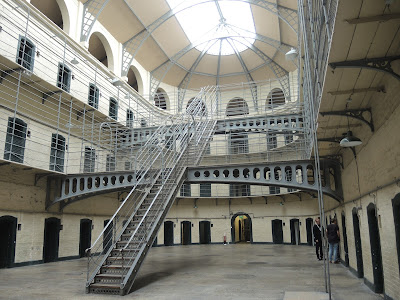 We ended Sunday and the weekend with the fantastic Celtic Nights traditional Irish music and dance show at our hotel, where we learned 'lilting' as we attempted to sing along with the musicians and finally figured out that 'craic' (pronounced 'crack') is the Irish term for fun, gossip, and entertainment.

Tomorrow is an early start on the train to southwestern Ireland where we'll hike for 4 days on the Dingle peninsula. We thoroughly enjoy the frenetic pace of Dublin, and are looking forward to some quiet time hiking.
Posted by Lynn Grieger and Mike Ryan at 2:29 PM