Wednesday morning the temperature was 45 degrees in Prescott. I put on warm tights, a fleece turtleneck, warm sweater, two warm upper body motorcycle jacket liners, motorcycle jacket, rain jacket, motorcycle liners for the motorcycle pants, socks, boots, neck warmer, helmet, and my super-heavy-duty mittens. I was (finally) ready for our trip to Bisbee in southeastern Arizona. The last time we went on a motorcycle trip in June and July, the temperatures were well above 100 degrees and I wore shorts and a sleeveless shirt under our lightweight motorcycle gear.

With no one coming to visit us for Thanksgiving, we decided to ride south for warmer temperatures. We started off Wednesday morning riding north on I-17 to reach AZ 260 heading east toward Payson, riding along the Mogollon Rim through the pine forests before we started descending into warmer temperatures and the Tonto Basin in the Sonoran Desert. 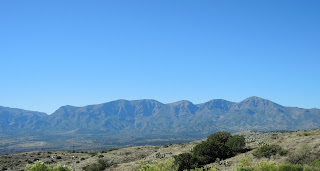 We stopped for lunch in Punkin Center, a tiny unincorporated town on AZ 188, because it was the first restaurant we saw since we rode through Payson over an hour earlier. After lunch, we continued south on AZ 188 along Theodore Roosevelt Lake in the Tonto National Forest. 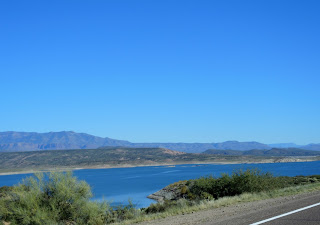 Lake Roosevelt is the largest reservoir completely within Arizona, and was formed by a dam on the Salt River, dedicated by President Theodore Roosevelt himself in 1911,one year before Arizona became a state. It's always a bit strange to see lakes in Arizona since it's such a dry area of the country, and this one is big enough to boast a marina and several boat ramps and campgrounds. 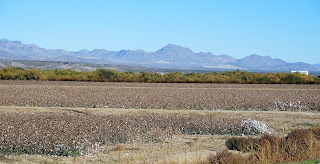 We rode past miles of fields of cotton and much of the time the sides of the highway were lined with scattered white tufts of cotton. In the 1980's Arizona grew 66% of the Pima cotton produced in the United States, but today produces only 2% of the total U.S. cotton crop due to changing climate conditions and the growth of cities that have overtaken agricultural land.

We continued south on AZ 191 and turned west onto I-10 for a short 6 miles before we turned south on local, 2-lane paved roads with almost no traffic. Usually traffic the day before Thanksgiving is a nightmare, but staying off the major roads and heading into a lightly settled area of Arizona meant we had long stretches of straight pavement all to ourselves. 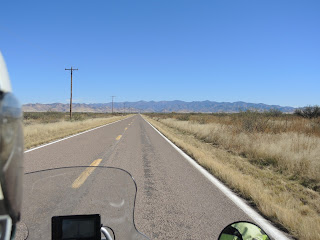 We rode into Bisbee just before 5pm, ready to walk around this once booming copper mining town built into the side of the Mule Mountains. 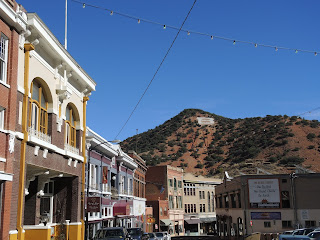 Our home for the next 2 days is the Copper Queen Hotel which opened in 1902 as the grandest hotel in the largest city between St. Louis and San Francisco. Supposedly it's haunted by three ghosts - we'll find out!

Posted by Lynn Grieger and Mike Ryan at 7:18 PM