It was 82 degrees at home Sunday morning at 10am when we decided to escape the heat and head north - sort of. Riding north typically means the weather will be a bit cooler, but then we also have the changes in elevation that actually make the temperatures go UP in some spots even when heading north.

We rode north on I-17 to 260 East (one of the warm spots is Camp Verde until we start climbing up on the Mogollon Rim) past scrubby bushes and trees and looming rock formations that make the road twisty and fun. 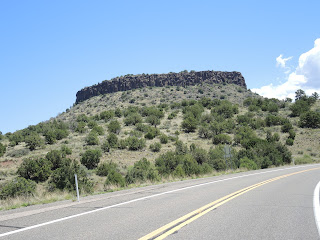 We headed northeast on 87 for a short few miles until we turned left onto Lake Mary Road at Clint's Well in the Coconino National Forest. Lake Mary Road winds and twists through Ponderosa pine forests, periodically opening up for a small meadow. 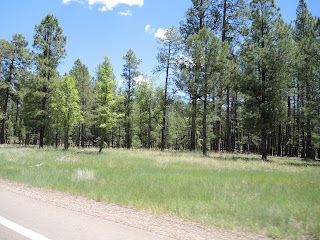 Lake Mary Road is a two-lane paved road used primarily by motorcycles out for a fun day and campers heading to one of a variety of different campgrounds.

There are two lakes along Lake Mary Road. We first came to Mormon Lake, the largest natural lake in Arizona. It was more a shallow puddle than a lake, because the water comes only from snow melt and rain. Sometimes it even dries up completely, which says a lot about the moisture in Arizona, where typically the rivers are dusty sand until the monsoon season. 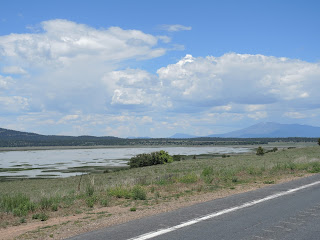 A few miles down the road we came to Lake Mary - and this is a real lake or more accurately, two reservoirs:  Upper and Lower Lake Mary, complete with speed boats and a sailboat. 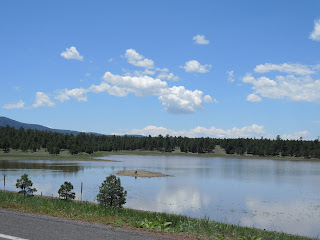 Lake Mary Road ends up in Flagstaff at 7000' elevation, where the temperature was in the mid-70's. As we ate burritos sitting outside, the puffy white clouds turned dark and grey. We took I-17 home, riding south through a short rain squall and cool weather until the temperature reached 105 degrees around Camp Verde.

As we rode the final few miles toward home, we saw dark rain clouds all around us. Sometimes when it's hot and dry like today, the rain almost completely evaporates before it hits the ground. 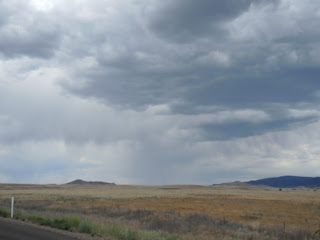 We rode 230 miles over 5 hours, enjoying the wide variety of landscape and weather that Arizona offers.
Posted by Lynn Grieger and Mike Ryan at 8:13 PM