The last day of a motorcycle trip sometimes is just about getting home, but today's ride, thanks to Brad and George of the Prescott STAR 511 motorcycle club, took us through twisty roads that bumped up and down like a rollercoaster, past irrigated fields of cotton, and several stops for ice cream, lunch, a cold drink, and even blueberry pie.

We started off heading north from Tombstone, leaving behind the tourists and the gunfights for a ride through rocky canyons and bluffs in the Sonoran Desert. 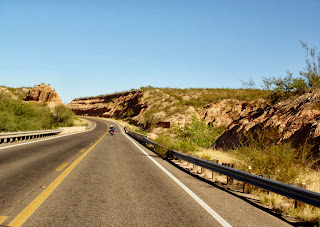 Brad promised we'd see saguaro cactus, but I didn't expect the thousands of cactus covering the mountainous landscape in the Rincon Mountain District of the Saguaro National Park just east of Tucson. The 91,000 acre park was first created in 1933, and since the saguaro can live for 150 years, some of the ones we saw today were already 80 years old - and just growing 'arms' - back in the 1930's. 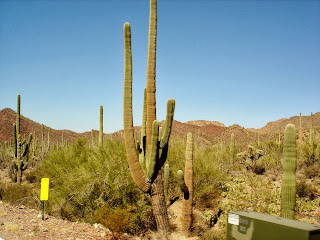 We followed the winding road up and down through the saguaros to Old Tucson in the western part of the Saguaro National Park where hundreds of western movies, TV shows, and commercials were filmed. Brad said we could easily spend a day walking through the old movie sets and watching musical revues and gunfights. We drank cold water and took pictures of the outer buildings and cactus, and I peeked over the top of the wooden fence to get a glimpse of the town. 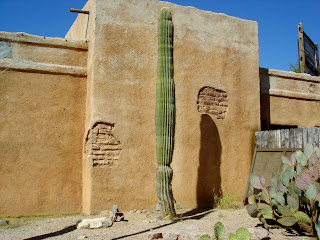 As we continued north toward home, I was surprised to fields of cotton growing in the middle of the desert between Tucson and Phoenix. Cotton is one of the 5 C's that were the driving force of Arizona's economy:  cotton, cattle, climate, citrus and copper. In fact, in the 1920's cotton replaced almost all other agricultural crops in Arizona. Due to urban development taking over the fields and water concerns, less cotton is grown today but it's still a significant crop. 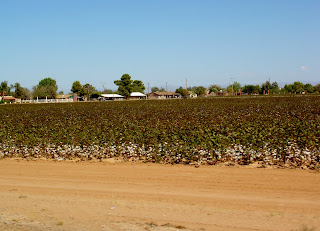 George led the way to one of his favorite lunch spots, the San Tan Brewing Company in Chandler, one of the Phoenix suburbs. We sat outside in the shade and enjoyed lunch while we listened to music from the Indian Market taking place in the town square across the street. George continued to his home in Phoenix, while Brad led us further north to our final stop of the trip at the Rock Springs Cafe in Black Canyon City. The Cafe was founded in 1918 as a general store and today is famous for its pies - they sold over 50,000 in 2007. We did our part by sharing a slice of blueberry pie before we put on warm layers of clothing as the elevation climbed and the temperature dropped from the high 80's to the low 60's. 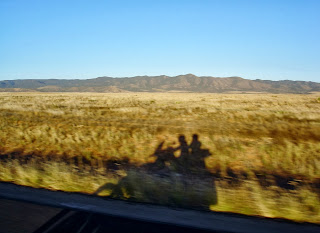 I took the last photo of our 3-day trip, capturing our shadow on the grassy plains with mountains in the background. We rode 700 miles from Prescott to Tucson, on to Tombstone, and back home on a trip that introduced us to southern Arizona. I'm learning just how big our new home state is, and we already have more motorcycle trips planned to explore other areas.
Posted by Lynn Grieger and Mike Ryan at 8:54 PM