The first official day of Fall greeted us with a strong, cold northwest wind. On a motorcycle, a windy day takes on new meaning. Mike says the wind moves the bike sideways while we're going forward,  and we felt like bobbleheads during most of the trip.
Today Steve and Kim on their Kawasaki Concours and Tom and Christine on their Victory joined us for a ride to Payson on the Mogollon Rim. 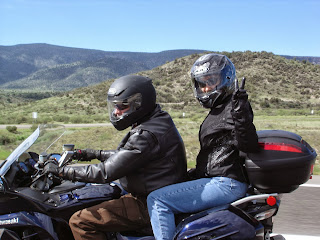 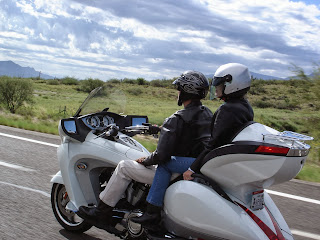 Tom and Christine
Payson was founded in 1882 and became well-known in the early 1900's due to  books and movies about the area by Zane Grey. We were more interested in the limestone and sandstone cliffs that rim the valley, and the twisting roads that climb through Ponderosa pine forests. 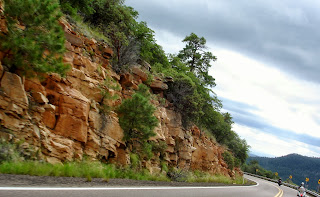 We like to ride through the changing countryside in northern Arizona, where in the space of an hour we travel through flat, dry high desert plains with mountain peaks a shadow in the distance; scrubby pines that dot the rolling hills, towering Ponderosa pines that crowd thickly together, dry creekbeds and washes, canyons that zigzag through the valleys; and steep, sharp rocky cliffs. Payson is only 100 miles mostly east and a bit south from Prescott, giving us plenty of time to stop for lunch at the Crosswinds Restaurant at the Payson airport.
The wind didn't let up during the ride back home, and the bright sun made the limestone cliffs stand out stark and clear against the clear blue sky. 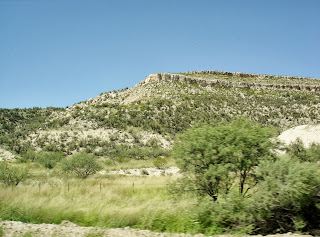 I like riding in a group, stopping to talk and stretch our legs, chatting at a stoplight, and pointing out a passing helicopter as we ride down the highway. We have hundreds of miles of roads to explore, and I'm looking forward to future trips. 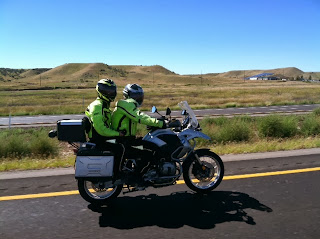 Mike and Lynn on the road - thanks for the photo Christine!
Posted by Lynn Grieger and Mike Ryan at 7:28 PM