Dry weather and a detour surprise 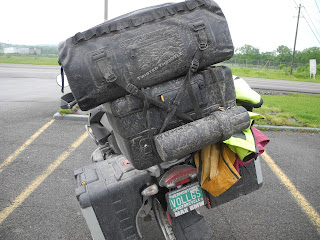 Our mud-encrusted BMW, loaded for our last day of travel.

After 10 hours of heavy rain yesterday, we were ready for dry weather today. The forecast was grim:  40-50% chance of rain and thunderstorms over the entire 300 miles between Towanda, PA and southwestern Vermont. We suited up in raingear and hoped for the best, getting encouragement from guys staying in our hotel who are working in the local natural gas industry, building a gas pipeline as part of the hydraulic fracturing in the county. We started out in heavy traffic on 4-lane Route 220, crossing the Susquehanna River in heavy fog. 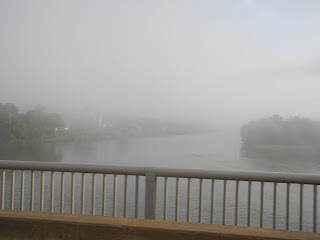 I'm not a fan of riding on 4-lane roads, but the last day of a trip Mike likes to get home as fast as possible, and after we crossed into New York state onto the Southern Tier Expressway we made really good time. The skies were cloudy and grey but the rain held off, and we  hoped to stay in front of any bad weather as we headed east.

We turned north onto 2-lane NY Route 30, enjoying the sweepers as we rode through the Catskills in Delaware County. Route 30 hugs the shores of the Pepacton Reservoir that supplies 25% of the drinking water to New York City. When NYC purchased the valley in 1942, it destroyed four towns and displaced over 900 people. Small signs mark the location of Arena, Pepacton, Shavertown and Union Grove. 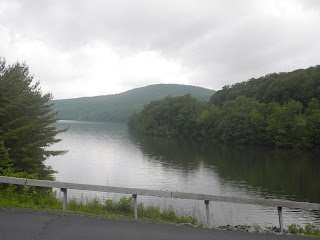 As we rode 15 miles along the curving reservoir, I wondered about the people in those four towns, and how it must feel to be uprooted and forced to move to provide drinking water to people 100 miles away. The next time I'm in NYC, I'll remember the Pepacton Reservoir and the people from these towns when I drink a glass of water.

The landscape opened up into farmland backed by the Catskill mountains, and instead of steep climbs and twisting hairpin turns in West Virginia we found ourselves coasting along sweeping, curving roads that led us toward home. 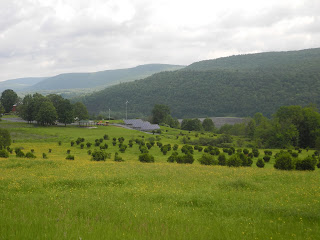 When we reached Saratoga Springs, NY Mike turned off the GPS as we know this area well. We were cruising along a county road when we came to a detour; the bridge has been completely removed and the road is closed. You know that feeling when you're in a familiar spot, but you don't know exactly where you are? Mike turned the GPS back on, and we followed Camden Valley Road through Shushan, NY as it narrowed and then turned to dirt, and ended in a familiar spot:  the top of the Notch in Sandgate, VT. Once again, we were in familiar territory. The boys had friends who lived in Sandgate, and I deliver Meals on Wheels in this area. The detour gave us the opportunity for one more steep descent, complete with tight hairpin turns as we rode down through the Notch.

As we sped out of the Notch and continued down into Sandgate, we saw a mother deer and an extremely small fawn in the field. The mother ran off into the trees, but the fawn hid in the tall grass. 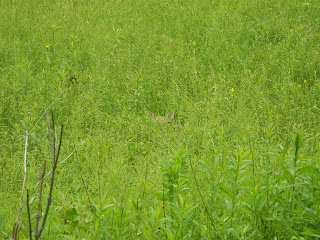 look closely in the middle of the picture and you'll see the fawn's ears
Mike shut off the motorcycle and we waited quietly for a few minutes, hoping the fawn would stand up so we could see her, but she stayed hidden. Mike is convinced she's only a few days old, about 2' tall and even smaller than the young fawn we surprised on yesterday's ride.
The skies grew dark and the temperature dropped, but the rain held off until we parked the BMW in the garage at home - and then the skies opened up and it poured. Perhaps speeding along on 4-lane highways kept us ahead of the storm, and we even had the opportunity to linger for a few minutes enjoying the quiet of rural Sandgate and a young fawn. We put the empty waterproof duffle on the back porch, letting the rain wash off the mud.
We've been gone for 6 days, traveling 1850 miles from southwestern Vermont through New York, Pennsylvania, Maryland, and Virginia to the southwestern border of Kentucky and West Virginia in Hatfield/McCoy country. The initial purpose of the trip was to run a marathon. The joy and memories are of time spent on the motorcycle, watching the countryside and feeling the wind - and rain - as we rode along.
﻿
Posted by Lynn Grieger and Mike Ryan at 7:13 PM