If it's sunny and above 60 degrees, it's time for barbecue!

March teased us with hot temperatures and the promise of an early Spring, and then April roared back with cold, rainy, gray weather. The BMW sat in the garage, waiting for the sun to return.

It seems that many of our favorite rides involve food, and today was no different. We started with a plan to eat a late lunch at Curtis BBQ in Putney, home of the best barbecue we've found in the Northeast. 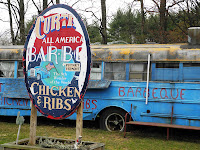 We headed north on Route 11/30 into Londonderry and through Chester before turning onto Route 103 on our way through Rockingham and Bellows Falls, ending up on Route 5 to Putney.  The damage caused by "Irene" - Tropical Storm Irene that lashed southern Vermont the end of August, is evident everywhere a stream or river travels near the road. People usually visualize mountain ranges covered with pine and hardwood forests when they think about Vermont, but they forget about the vast amount of water that is drained through these mountains. We didn't have much snow this winter, and Spring has been unusually dry, leaving the streams and rivers much lower than usual but showcasing the gravel, boulders, and huge trees that were hurled by Irene.

Usually when we pull into Curtis Barbecue we're greeted by a parking lot full of motorcycles, pick up trucks, and cars with license plates from Vermont, Massachusetts, and New Hampshire. Today we were only the second bike in the lot, parking next to a Harley owned by a friendly guy from Springfield. 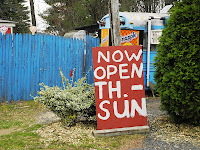 This is only the third weekend Curtis has been open this season, but everything looks familiar:  the menu featuring pork and chicken, potato or cucumber salad, and lots of paper towels to soak up the BBQ sauce. 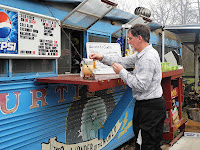 We listened to acoustic guitar music while we enjoyed lunch, and then went in search of ice cream for dessert. We took the circular, long way around route back home riding through busy and congested Brattleboro then along Route 30 along more open and rural countryside into Newfane. How a business called The Creamery can't have ice cream on the menu is beyond me, but they didn't so we rode on, still in search of dessert.

Since we ride along Route 30 from Brattleboro to home fairly often, Mike took a detour from Townshend into Grafton, a beautiful old Vermont town that gives meaning to the phrase "you can't get there from here". Grafton isn't on any direct road, and in fact we rode on over 10 miles of dirt roads that have been repaired since Irene cut Grafton off completely. We rode through wide stretches of forest and farmland before turning out onto - paved - Route 30.

Still without ice cream to finish off lunch, we turned into Zoeys deli in Manchester, hoping to try their new gelato. One of the staff was hanging up the 'closed' sign as we pulled up to the door, so we kept going to our old stand-by:  Ben & Jerry's outdoor stand owned by our friend John. We joined the everpresent line of customers to order Chunky Monkey and Vanilla Heath Bar Crunch ice cream.

Lunch finally complete, we headed home a couple of hours ahead of the rain. 120 miles in a 3-hour ride on familiar roads to a favorite lunch stop was a great way to spend a sunny, warm April afternoon. Forsythia is blooming, the trees are starting to bud, and farmers are just starting to think about plowing their fields. The weather forecast for tomorrow is more warm, clear weather and Mike is planning to ride the BMW to a meeting in Massachusetts. I wonder if he'll find ice cream for lunch? 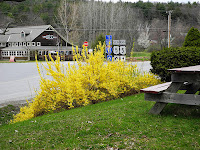 Posted by Lynn Grieger and Mike Ryan at 7:56 PM