After wandering around Europe for 3 weeks on a motorcycle and bicycle it felt a bit odd to be back at home on our own BMW, traveling familiar Vermont roads. No hairpin turns, tour busses to contend with on narrow twisty roads, cows in the middle of the road, or a group of friends to ride with. Today it was just Mike and I, spending a day together on our BMW. 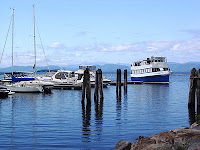 The day started off foggy and misty, but the sun broke through by the time we reached Burlington. We headed straight to the waterfront, and spent a few minutes watching the boats and streams of people taking advantage of a sunny, warm Fall day.

After lunch with friends and a walk along the bike path we pointed the bike toward home. Heading south, we rode through the Champlain Valley with the Green Mountains to the East and the Adirondacks across Lake Champlain to the West. 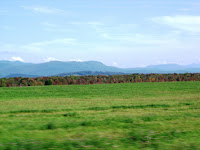 ﻿Close to Burlington there was a line of traffic heading in both directions as far as we could see, but the further south we traveled, the less company we had on the road - which is exactly the way we like it. Early Fall is a beautiful time of year in Vermont, with fields still lush and green waiting to be harvested yet some of the early leaves are beginning to change color and people decorate their homes and businesses with pumpkins. 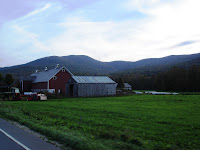 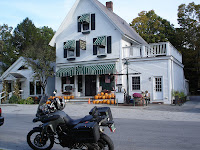 There's something comforting about riding familiar roads. I've driven these roads countless times in a car, yet this was the first time on the BMW. ﻿On the bike, I notice the barnyard smells, catch glimpses of hawks soaring on updrafts, wave greetings to other motorcycles on the road, and fall into the rhythm of winding our way through the valley. At times like this, Mike does the 'motorcycle happy dance', similiar to a skier carving "S" turns through the powder.

I can't think of a better way to spend the day.
Posted by Lynn Grieger and Mike Ryan at 5:01 PM